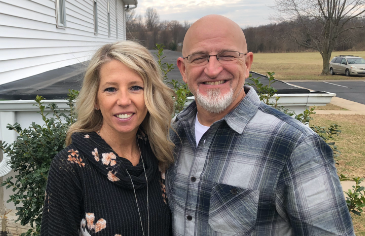 Chuck Chambers is one of our deacons. He is married to Tina, and they have two grown sons, Joshua, and Jordan. They joined Meadowview in August of 2007

He came to know Christ in 1983, at the age of 13.  He was attending Aurora Christian Academy.

"I had been feeling God working on my heart and understood that I needed Jesus and the forgiveness and salvation that his sacrifice on the cross afforded me.  One day in school we watched the film "A thief in the night".  It was then that I knew for sure it was time to accept Christ.  I went to one of my teachers, Mrs. Nan Phipps, and told her that I was a sinner and needed to be saved.  She took me to the chapel and prayed with me and then I prayed and put my trust an faith in Jesus and His resurrection."

He is a graduate of Aurora Christian Academy. He served in the United States Air Force for over 15 years. He attained some college while serving in the Air Force.

He is a Terminal Operator for Phillips 66 Pipeline Co.